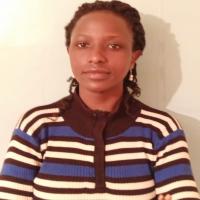 I was born and raised in Machakos county where I attended Yikiatine Primary School between the year 1995 and 2003. Upon scoring 402/500 marks in the 2003 KCPE exam, I joined St. Angela's Girls' Secondary School in Kitui County between 2004 and 2007, where I scored A-(minus) in KCSE. I was enrolled at the University of Nairobi in 2009 to study Bachelor of Economics and Statistics and graduated from the university in 2013 with Second class honors (upper division)

Generalized Linear Models (GLMs) are a strategy for tackling statistical questions, especially those that involve non-normally distributed data, in such a way that much of the simplicity of the linear model is retained . This study was aimed to evaluate Generalized linear models for count data with application to Pre-Exposure Prophylaxis HIV sero-conversion (PrEP) data. This study used data that was retrieved from Kenya Health Information System (KHIS) for the period March to April,2019 from 104 health facilities. Poisson Regression Model, Quasi-Poisson Regression model, Negative Binomial Regression Model, and Conway-Maxwell Poisson regression models were compared to determine the best model which can be used in modeling HIV sero-conversion among PrEP users in Kenya. The model with the best fit was checked using Akaike information criterion (AIC). From the results, the Conway-Maxwell Poisson regression was considered a better model when analyzing PrEP data in Kenya since its AIC value was the least.

An ICTP-EAUMP Hybrid Meeting. You can submit your application…

“Innovation for Transformation and Impact in the society.” Is the Nairobi Innovation Week 2022…

END_OF_DOCUMENT_TOKEN_TO_BE_REPLACED

© University of Nairobi 2019.  All rights Reserved.